Of the 14 Indigenous men that have played for the Wallabies, one characteristic stands out: the mercurial nature of their play.

One person personifies that more than any other: Mark Ella.

And yet, he was by no means alone in bringing something extraordinary to the field. From Lloyd McDermott to Kurtley Beale, Glen Ella to Andrew Walker, these men could do things on the field few others could.

So, what is it that makes Indigenous players so distinctive?

“Well, I think we have always liked to show off a little bit,” said Gary Ella, speaking at the launch of the Wallabies’ Indigenous jersey on Wednesday at the National Indigenous Centre of Excellence in Redfern.

“I think the Aboriginal people that have played have always been pretty confident in their ability on the field and like to show off. So, it’s a little bit more flamboyant if you like and taking a lot more risk. When it comes off, it can be quite spectacular.”

Be there for the third Bledisloe Cup clash at Sydney’s ANZ Stadium, Saturday 31 October. Tickets HERE

That it can be, with no player in Australian rugby showcasing that mercurial ability more than Beale over the past decade.

Like him or loathe him, whenever Beale had the ball, hairs stood up on the back of your neck. He made things happen and more often than not when Beale fired so did the Wallabies.

What also was clear during the Beale-era was the support he had from his teammates. They knew what he was capable of and they thought they were a greater chance of winning when he was humming.

It’s something Ella says is vital: making Indigenous players comfortable in their own skin to express themselves.

“The good thing is most Aboriginal and Torres Strait Islanders that come through, the rest of the team have been behind them,” he said.

“If you want to have a go at it, have a go at it and when things haven’t gone so well, there’s always been that support behind and that’s really important.

“You can’t get Aboriginal people playing the game and (ensure) they have to play a particular way. If you have a look at the past 14, we just wanted to play what’s in front of us. If you have a talk to them, if you talk about their skills, they all play what’s in front of them rather than playing to a set plan and I think Aboriginal people are very good at ab-libbing on the field.”

But for the first time since the Wallabies started wearing their Indigenous jersey in 2017, Beale won’t be in the reckoning to wear it.

Yet, Dane Haylett-Petty – Australia's dependable fullback, who is last fit and available for selection – said that he hoped by wearing the jersey that more Indigenous boys and girls would be inspired to pick up a rugby ball and follow in the footsteps of his former teammate.

“Hopefully by wearing this jersey it’ll inspire more Indigenous kids to aspire to wearing the Wallabies jersey in the future. So many talented athletes, we see them dominating the AFL and the NRL and I think it’d be great to see more and more come through and wear this Wallaby jersey.”

The absence of an Aboriginal or Torres Strait Islander in Australia’s 44-man squad begs the question, where are they? 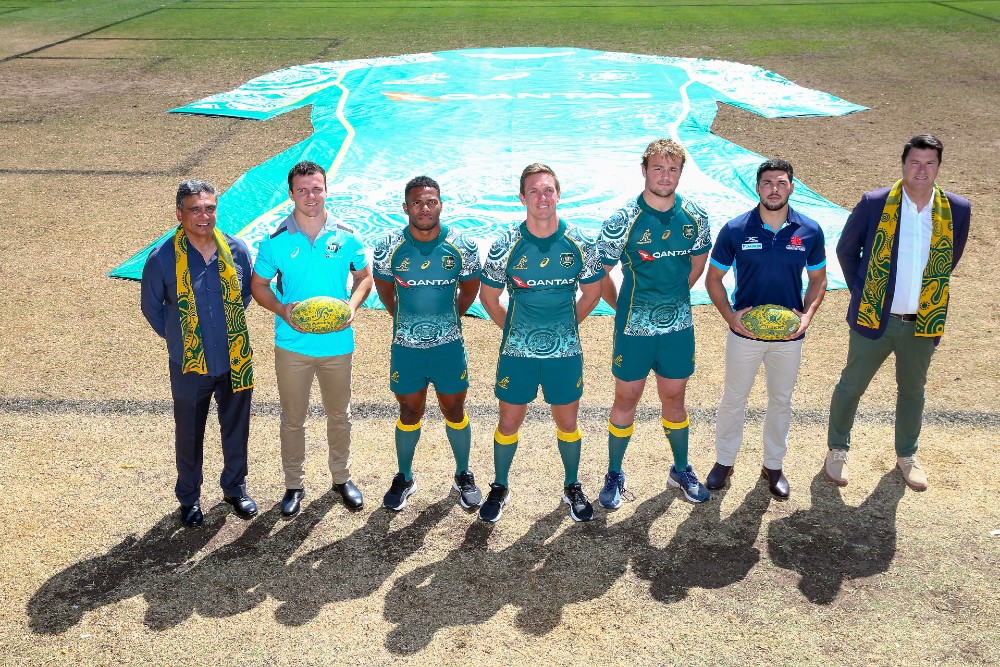 It’s something Ella wants to rectify too.

“The other thing, too, on the jersey that has the 14 big circles– and that represents the 14 players – we want more Wallabies playing so we can have a new design with a couple of more circles on them, which represents not just the players but the communities they come from,” he said.

“We want about 20 of those in the next couple of years.”

There are several Indigenous men and women playing in Super Rugby and in Australia’s respective men’s and women’s teams, but that hasn’t, as yet, transferred into the XV-person game.

Elusive Brumbies back Andy Murihead headlines the Super Rugby talent, while Sevens sensation Maurice Longbottom, who came through the league pathways, personifies the mercurial nature that Indigenous players bring to the table.

Could he be the next Indigenous Wallaby?

The Sevens back, who has been running around for Randwick during the COVID-19 interrupted season, might not fill the bill of the regular hulking outside back of the modern game, but as Springboks flyer Cheslin Kolbe has proved pace and feet can be just as lethal.

If not him though, Rugby Australia is putting themselves in the position to discover the next Ella or, indeed, the next Beale.

“I think in the beginning league was really dominant and if you have a look at the states outside of NSW and Queensland, AFL’s had a real strong base for a very long time but we’re gradually introducing the game to more Aboriginal communities around Australia,” Ella said.

“We’re talking about doing Dream Big Time a little bit earlier, about getting players associated with sevens teams and now we’re having a lot more players play at club level. We’ve had good success recently in having a lot more people going into Super Rugby and Aboriginal communities are seeing that opportunity where they can play professional rugby. League has been professional and so it had an early footing, but now they’re seeing that rugby offers just as much.” 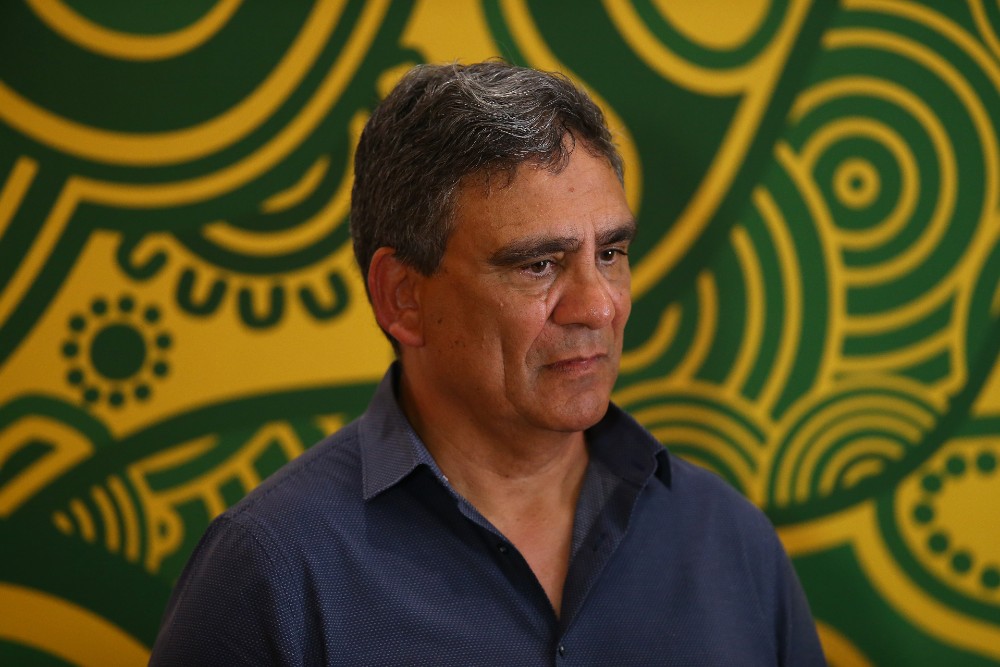 Nor does Ella believe that the structural flaws that once slowed the discovery of this magical talent still run true.

“I think originally there was, it was always very difficult to get into the rugby community, but that’s been broken down quite a bit by not just my family but the other Wallabies,” Ella said.

“Now clubs are looking for players to come through, the Lloyd McDermott Rugby Development’s had, who has put forward the opportunities for young players coming through not just in the game but the benefits of playing.

“We’ve had a good relationship, which is getting stronger each year, with Rugby Australia and there’s a lot more programs being put in place to encourage Aboriginal and Torres Strait Islanders to play – both men’s and women’s – and we’re seeing a lot of that success in sevens.

Importantly, too, Rugby Australia recognizes the need to do more.

“It’s critically important and I think we can do a lot better as Gary said,” Rugby Australia’s Interim CEO Rob Clarke said.

“There’s a lot of work we’ve done to try and harness the extreme talent that exists out there for sport among the Indigenous community and rugby needs to do a better job and we’ll do that with additional programs in the coming years.”

Added Chairman Hamish McLennan: “It shows we’ve got to open up more play pathways for Indigenous rugby players. What it also says is we’re very committed to an inclusive culture and very proud of our Aboriginal Indigenous heritage and we’re going to promote it proudly.”

'NOT THE ALL BLACKS OF OLD': Wilson says it's time the Wallabies stood up

ANALYSIS: There are positives, but the Wallabies Lost Bledisloe II because they did exactly what Rennie warned them not to

'SELECTION CAN FIX THAT': Rennie highlights where Wallabies lost Bledisloe II and threatens to wield axe to solve issues

The 14 Indigenous Wallabies have showcased what Rugby Australia is missing out on by having so few pull on the jersey.

Wearing the jersey on October 31 is one small step to rectifying that blight.

After all, it’s the only national team that pays tribute to the culture and deep seeded roots of Australia’s heritage.

But as Ella says, the Indigenous jersey means more than meets the eye.

“The jersey is special. Every time it’s put on, I know a lot of the people that I talk to, their eyes light up. A lot of my Indigenous mates get real excited about it and all week it’s, ‘When are you going to get me a jersey?’

“People do get excited about it and they get excited about the stuff around it. If you have a look at the game at Perth last year, the Welcome to Country and there were dancers on the field and all the boards around the field were showing Aboriginal images, symbols, dancers. Rugby is now as inclusive as it’s ever been and possibly as much as any sport in Australia.”

Inge Visser takes her coaching to the next level